Each time the month of May rolls around so too does National Law Week with its diverse suite of delectable law-related activities. Most events centre on public legal education for non-lawyers, however, one special breakfast is reserved exclusively for the legal industry. 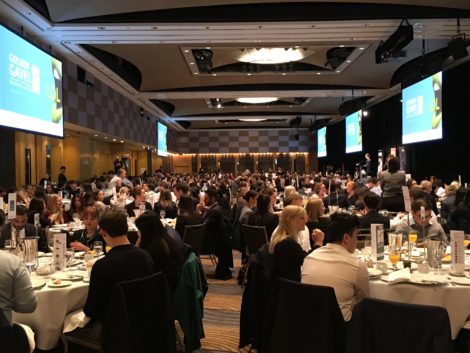 Hosted by NSW Young Lawyers @ The Westin, Martin Place, Sydney on Friday 18 May 2018. This year’s competition left the crowd frothing for more.

It’s a morning where lawyers can let their hair down, laugh at themselves, and watch as their colleagues rip shreds off one another in the Golden Gavel ring.

It’s the kind of event where public humiliation is a prerequisite but, for most competitors, the promise of sweet victory is worth the risk to life, limb and career. The public speaking battle of wits kicks off with 10 young lawyers from each state and territory having only 5 minutes to prove to a crowd of peers, colleagues and superiors why they should receive top honours.

(That’s what it says in the marketing materials anyway).

In reality, it’s a lawyer vs lawyer bloodbath where only the most fearsome competitor – one who is able to outwit, outplay and outlast the competition –  leaves the arena victorious.

The ante was observably upped this year with each contestant dropping the metaphorical hammer so hard and so fast that they practically left dents in the carpet.

So without further adieu, let’s introduce just a few of this year’s brave contestants:

Topic: Smashed avo and other reasons I couldn’t be a human rights lawyer

Topic: Ten things the Brady Bunch can teach you about a successful merger

Congratulations to Joshua who took out the Runner-Up & People’s Choice Awards!

Congratulations to Tom who successfully fought off a strong and competitive field, claiming the ultimate victory!

Tom will go on to represent NSW at the National Gavels later this year.

Watch the full wrap up

And that draws to a close another killer law week!