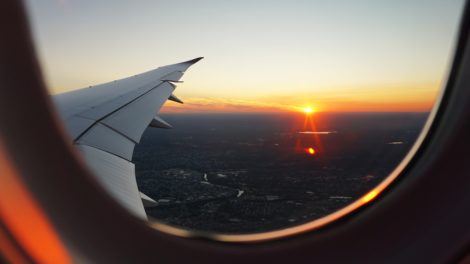 We’ve all been there.

Feeling wrecked and disorientated after staying up until 3am completing last minute packing before a major international trip that same morning. Arriving late to the airport, you’re faced with filling out an outgoing passenger card including your name, flight number, intended destination and duration of your trip as an enormous queue snakes around black ropes, incrementally lurching forward at Sydney International Airport’s departure area.

Invariably, the build up of tension and stress in the days preceding your big adventure, combined with the frantic struggle to find your pen and passport at the bottom of your backpack, and the awkward aerial acrobatics (one part crouching tiger pose, one part drunk uncle) you perform while filling out the card kick things off to a less than ideal start. As you complete your details against the unstable and lumpy surface of a friend’s back, periodically stepping forward as the line inches closer to customs officials, you collide with an irritable traveller agitating for the top of the queue.

The tiny boxes are laughing at you.

Back you venture to the end of the line where you fetch another card and resume the heinous airport shuffle.

From 1 July 2017, the Department of Immigration and Border Protection is removing the requirement to endure those insufferable tiny boxes as part of a move towards more efficient and streamlined process for travellers.

The Minister for Immigration and Border Protection, Peter Dutton said:

The automated process will add to existing state-of-the art passenger processing technology at our border and will help reduce queuing times and get travellers to their destination more quickly. Removal of the outgoing passenger card further supports the move towards a more seamless, secure and simplified border clearance process.”

The information previously gathered on paper-based outgoing passenger cards will now be collated from existing government data and will continue to be provided to users. Re-using this data is just one of the measures being taken by the Government to reduce the burden on Australians and international visitors to provide the same information multiple times.

While arriving travellers will still be required to complete the orange incoming passenger card, the removal of the outgoing passenger card is considered a positive move towards the continued smooth passage of increasing traveller numbers departing Australia, which last year numbered 40 million.