You are here: Home / Career / ‘I made a 180 degree turn’: Change Direction With A Postgraduate Law Degree
Good goes around. Share this story!
views 2,457
2 min read 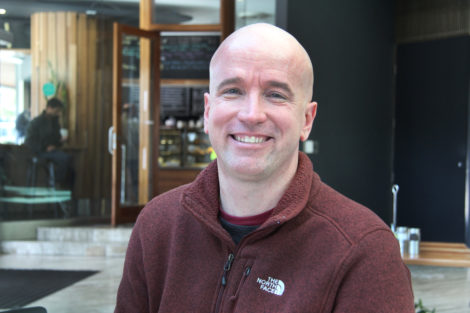 Michael Fortson knew he would study law sometime after he finished high school in Miami-Dade County, Florida. He just didn’t think he would wait until he was in his forties, married with two children and living 15,000 kilometres from home before he began.

His four-year-plan to pay for college by joining the US military turned into a 23-year career with postings in the Caribbean and the United Kingdom. However, in 2013, Michael and his Australian wife decided it was time to settle in Canberra. They’d be closer to her parents, their children would have access to good schools and he could finally do a Juris Doctor at the ANU College of Law.

We moved here from the United Kingdom [his last posting before retiring from the military] in December 2013 and I started the intensive foundation course in January 2014,” he said.

I loved it. I was always fascinated with law and the idea of studying it, so I really did enjoy all of my classes.”

As for taking on full-time study after two decades in the workforce, Michael didn’t shy away from the challenge.

I made a 180 degree turn from my midlife career change, so it’s totally doable,” he said.

The college demonstrates that they will help people reach the end. A lot of my cohort were able to fluctuate between full-time and part-time when they needed to.”

Studying law in Australia and experiencing the clinical programs that ANU College of Law offered gave him a perspective on law and humanity that he said he hadn’t considered before.

He did the Prison Issues Project, a legal literacy program that the Law Reform and Social Justice initiative runs between law students and inmates at Canberra’s prison, the Alexander Maconochie Centre (AMC).

It changed my preconceptions of what a prisoner was,” he said.

My biggest takeaway from the Solaris Program [a rehabilitative program for prisoners about to be reintegrated into the community] was they were just normal dudes who had made a bad choice somewhere along the line.”

Michael now works for the Tenant’s Union ACT – led there by a path that began with ANU Law’s clinical programs – and he has found community law more satisfying than he had imagined. However, despite retiring from the military, he is yet to shake off his interest in defence. Michael’s goal is to work for the Department of Defence.

The legal side of military operations really interests me,” he said.

I would love to be on the planning cell that advises the minister responsible for approving military operations on the ground.

It’s a very specific job but I’m interested to the extent that I’m actually considering getting re-uniformed – joining the ADF as a legal officer – once I’ve settled the logistics of being a dual citizen.”

Michael is currently completing the Graduate Diploma of Legal Practice with ANU Legal Workshop which is the compulsory postgraduate qualification needed to practise law in Australia.

Designed for students who have completed their undergraduate degree in a discipline other than law, the ANU Juris Doctor allows you to gain the professional qualification required for admission to legal practice in Australia. Building on the knowledge and experience you’ve gained in your undergraduate degree and working life, the ANU JD places a contemporary focus on law and legal issues to create an engaging, highly relevant program of study. The degree is available on-campus or online.

The ANU Graduate Diploma of Legal Practice (GDLP) not only provides the qualification you need to be admitted as a lawyer in Australia but also the skills you need to take the next step in your career in any professional environment. Designed to provide you with the practical skills and professional understanding you will need as a lawyer or barrister, the ANU GDLP builds on the knowledge you have gained in your Bachelor of Law degree or Juris Doctor, or equivalent.

This post is proudly sponsored by the Australian National University College of Law.