You are here: Home / Features / Legal Ink: Who Owns The Tattoos On Your Skin? Probably Not You
Good goes around. Share this story!
views 2,827
4 min read 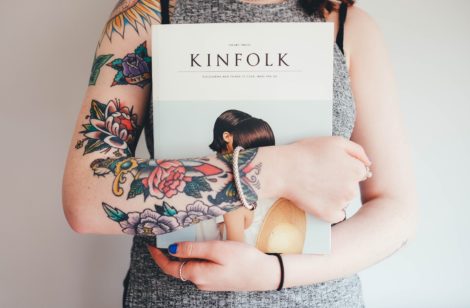 While preparing a lecture on fashion law, trademarks and intellectual property, a strange thought occurred to me: “Is my skin an illegal artwork?” Don’t get me wrong, I’m no masterpiece. I do, however, have tattoos. One illustration by Audrey Kawasaki, one of my favourite Japanese-American artists, is sizeable and took nine hours to complete.

The tattoo was completed long before I turned my mind to the intricacies of intellectual property law, which is developing at rapid speed around the world. We’re talking attempts made by companies to trademark colours, shapes of lego and chocolate, hashtags and cheerleading costumes. Elsewhere, famous individuals have sought to protect personal branding and potential financial loss by really stretching the definition of what is trademarkable (think Taylor Swift trademarking the phrase “this sick beat” and Gene Simmons seeking to trademark the infamous ‘devil horns’ hand gesture). There has also been widespread and expensive litigation surrounding copyright infringement of popular songs and photographs.

What is, and importantly, what is not capable of being protected by intellectual property law has significant flow on implications for individual creative rights and, increasingly, for big business.

Personally, I have occasionally regretted my failure to contact Kawasaki and request permission to use her design for my tattoo, although at the time my mind was more preoccupied with “arghhhh needles!”

So the question remains: could I be breaching Australian copyright law? Could my tattoo artist? The answer is a resounding … probably.

While there is little law in this rather niche area, especially in Australia, it has been judicially considered in the United States.

Are tattoos subject to copyright protection?

Long answer – it may depend on where you live.

The UK, for example, has been reticent to explore litigation in this area, citing irreconcilable tensions between human rights law, including the right to privacy and freedom of expression, and copyright protection. 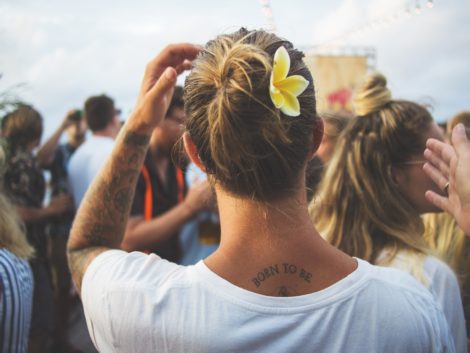 In Australia, copyright law automatically protects original ‘artistic works’ such as paintings, drawings, cartoons, sculptures, craft work, architectural plans, buildings, photographs, maps and plans. However, there is still some uncertainty around whether a tattoo would qualify as an artistic work in Australia and there has been no litigation in this area to clarify the issue.

Some commentators have suggested that to put the matter beyond doubt tattoo artists could sketch or draw original designs on a sheet of paper prior to beginning a tattoo on skin.

Do celebrities and sports stars own their tattoos?

For anyone who has endured the 2011 film The Hangover: Part II, you may have observed a copyright violation. In the film, ‘Stu the dentist’ ends up with boxer Mike Tyson’s signature tattoo inked on his face.

As it turns out, Tyson’s distinctive tattoo was designed by the award-winning tattoo artist, Victor Witmill, who has described Tyson’s design as “one of the most distinctive tattoos in the nation.” At the time the tattoo was completed, Witmill had the foresight to have Tyson sign a document confirming that ownership rights to the original design vested in him as the artist. 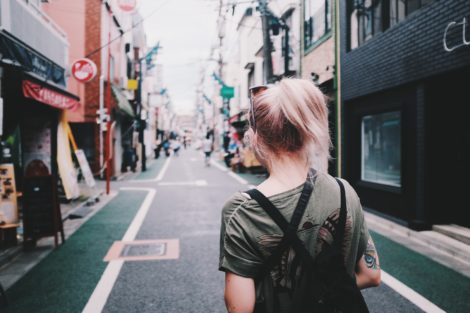 Fast forward to Warner Bros. anticipated release of The Hangover: Part II and – bang – Witmill sought an injunction to prevent the studio from releasing the film on the basis of copyright infringement given that he was not contacted by either the studio or Tyson to seek his permission to use the image in the film or to credit his creation.

The Honorable Catherine D. Perry referred to the contract/release between Tyson and Witnill as:

and was also satisfied that Warner Bros. use of the design was unauthorised. It was noted that on the balance of equities (given the “very large” harm to the studio and loss of millions of dollars) as well as public interest considerations (given that the public wanted to see the movie and theatre owners stood to lose a lot of money) that Witmill’s injunction should be denied and the film allowed to open.

However, despite the ruling, Judge Perry said that Whitmill would “probably win” his case if he sued Warner Bros. Witmill went ahead and sued the studio for copyright infringement and the case was settled out of court for an undisclosed sum.

As we have seen with The Hangover: Part II, any replication of a tattoo design without permission from the creator can constitute a breach of copyright.

When it comes to video games, to enhance the user experience and simulate reality, sports stars are created as realistically as possible even down to replicating tattoos.

In recent years, several lawsuits have been filed over the use of copyrighted tattoos on players without permission from the artist. 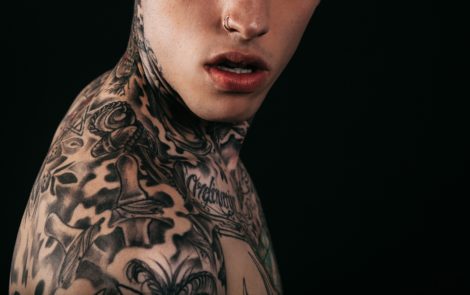 EA Sports has come under scrutiny several times. The company was sued over a 2004 game, NFL Street, which prominently depicted footballer Ricky Williams’ tattoo created by artist, Stephen Allen, on the cover of the video game. Allen sued both Williams and the publisher for replicating the tattoo without seeking his permission.

In 2012, UFC fighter Carlos Condit’s tattoo artist filed a lawsuit against video game developer THQ for featuring his artwork in a new UFC game without permission. The tattoo artist sought $US 4 million and was awarded $US 22,500 but later challenged this sum as inadequate. The case settled for an undisclosed figure.

It should come as no surprise, then, that for the 2014 game release, EA Sports, who now owns the UFC licence, removed or altered tattoo artwork on its digital fighters, including Carlos Condit’s famous ink, to avoid any risk of litigation from owners of the original designs.

One savvy game developer who has taken note of the growing litigation trend surrounding the replication of original tattoos in video game development is Madden. Its NFL game depicts all players, apart from Colin Kaepernick, as cleanskins.

The NFL players association has raised similar concerns with its members and advised players to obtain a written release from tattoo artists even before the needles are unpacked. For existing tattoos, players are advised to contact the creator of the original tattoo and obtain a release. Managers for Colin Kaepernick of the San Francisco 49ers even wisely asked tattoo artist Nes Andrion of Endless Ink to sign a waiver ensuring Kaepernick’s tattoos were his and his alone. 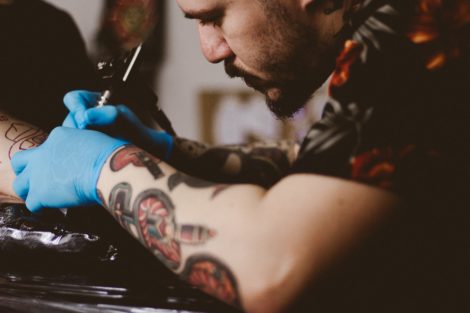 As we have seen, not seeking permission from a tattoo artist or failing to obtain a written release, particularly in the case of sporting stars, can result in dire and very expensive consequences.

A 2016 copyright infringement case, for example, saw the NBA 2K16 game company, Take Two, sued by Solid Oak Sketches for over $US 1.1 million for the license to use their designs in video game representations of some of the biggest stars of the NBA including Kenyon Martin, LeBron James and Kobe Bryant.

The skin you’re in

In an age where social media influencers have millions of followers viewing personal images daily, it doesn’t seem like such a reach to consider the possibility that our bodies are becoming billboards that advertise our commercial interests, sponsors, passions, personality and perhaps our identity to the world. But how absolute is our ownership of the skin we live in?

Depending on how the law develops in this area, we may not own the artwork on it. 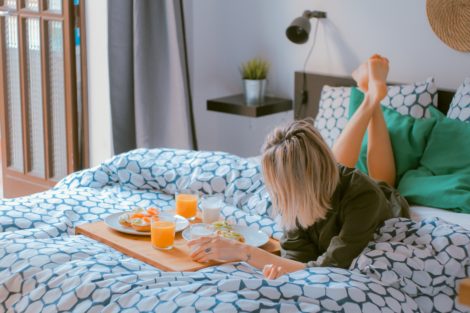 It’s easy to accept that making a copy of an artwork to hang in our home is a breach of the original artist’s copyright. But how is replicating another artist’s original work in the form of a tattoo on our skin any different? Will the courts accept such similarities or will tattoos be considered too impermanent to be copyright protected in Australia? It bears mention that a tattoo design walks around all day with you and is much more visible to the public than it would be hanging in your home.

Do you have any tattoos that could be violating copyright law? Let us know in the comments!

Zoe is a Perth based lawyer/writer/creative weirdo. She has a Bachelor Arts (Literature and Political Science)/Bachelor Laws from the University of Western Australia. Zoe splits her time between working for a not-for-profit community legal centre, a creative law firm specialising in intellectual property and creative industries, and lecturing in fashion law. To maintain her 'weird art kid' credentials she regularly tours, dances and DJs with a Girl Gang of 60s go-go dancers. Having previously launched and run a fashion company and an events production company, Zoe spends her down time writing about music, travel-fails, the arts, and other jibber-jabber. When not lawyering or secretly hating people who use nouns as verbs, she can be found travelling (generally to Japan). You can follow her on Twitter.